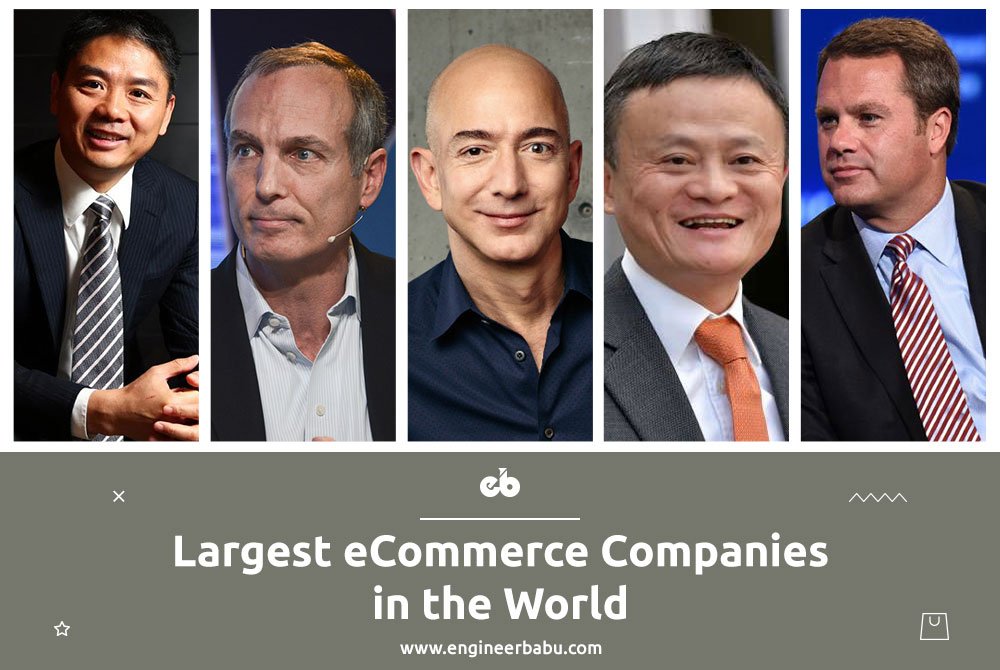 The entire landscape of trade has transformed in the last two decades. It had long ago shifted from the grudging offline experience to the easier and comfortable e-commerce experience – where everything could be bought or sold by a click of button.

I am quite certain that most of us are pretty much aware of that. It is also safe to assume that almost every one of us might have either heard of or used some of the services of the companies mentioned in this list.
The ecommerce landscape is dominated by the worlds’ elite – Billionaire businessmen like Jack Ma, Jeff Bezos, and others, are in a relentless race to dominate the ecommerce realm.

After all, the ecommerce industry is without a doubt the most lucrative business of the 21st Century.

Now, one might assume that he or she knows pretty much everything about the companies listed below, but I am pretty certain that you might not be aware of the secret sauce that made these companies so influential. Let’s shift our paradigms a little, and shed some light at these corporations from an entirely fresh and quirky perspective.

The list is not all Western; and no, Alibaba is not the only Chinese success story:

Only if you are living under a rock or were in a Captain America sort of coma for a while, could be the case when you might not have heard about this giant-little bird.
This Seattle based company (rather a country) is now the most valuable business in the universe.
But this isn’t the only thing that makes headlines about Amazon. The now immortal CEO of Amazon is equally in the news, if not more. 2018 saw Mr. Bezos become the first centi-billionaire of the world. His net worth is estimated to be a whopping 137.1bn USD (meh!)as of 2019.

The X-Factor:
Amazons’ 1997 letter to shareholders, gives us a pretty good insight into the way Jeff Bezos functions. The letter tells us about the unrelenting focus the famous founder has maintained through the years, along with some invaluable lessons for all who are pursuing organizational excellence.

Here are a few highlights:

Walmart is not just the world’s largest retailer (but Amazon is closing in), it is also the world’s leading private employer. Walmart products are manufactured in more than 70 countries. At any given time, Walmart is managing an average of $46.18 billion in inventory (Q: Oct 2018) throughout its 11,695 stores operating in 28 countries.
To top that, they have made several significant acquisitions (Flipkart being the most notable one) to compete with Amazon in emerging markets like India.

Walmart’s influence has been so immense that its impact on communities and society as a whole has been a consistent topic of academic interest in a variety of areas.

The X-Factor:
While Walmart is celebrating success, other major retailers are struggling.
Macy’s, the nation’s second-largest department store, had its share price plummet. For fiscal 2017, the retailer is projecting a 3.2 to 4.3% decline in sales.

J.C. Penney saw a 15.3% decline following its weak earnings report.
And Nordstrom, revered for its customer service practices, saw an 11.3 % drop, while Kohl’s slumped nearly 8% after disappointing financials.
SO, why is Walmart winning when most of the retail markets are tanking?

Alibaba is hailed as “the Amazon of China” because of its dominance in the worlds’ most populous country. Much like Amazon, the founder CEO of Alibaba boasts a big fanbase and is touted as a global entrepreneur and visionary.

Alibaba has been killing it since the dawn of the 21st Century and is on its way to dwarf American stalwarts such as Walmart, Amazon, and eBay. It has already outperformed Amazon, Google, and Microsoft in key areas such as public cloud revenue growth.

With entities almost everywhere, (movie production, music and movie streaming, online learning, micro-blogging, online maps, travel booking, mobile apps, and so much more), the Alibaba Group has shown the world that China is a force to be reckoned with.

So what factors are accountable for this incredible growth in such a short span of time? Let’s take a look,

If anyone in this world can lock horns with the likes of Alibaba is this ecommerce giant – JD.com has started giving Alibaba a run-for-money by introducing advanced technologies and drone delivery systems. They have also announced that they are planning to build more than 150 drone launch centers to improve delivery capabilities for consumers in rural areas.

Additionally, JD is in a strategic partnership with Walmart that was extended this year to further the integration of their resources, platforms, and supply chains within China.

“Within five years I’m 100 percent sure we will be the largest B2C [business to consumer] platform in China — we will surpass any competitor,” said Liu in a statement to Financial Times.

Booking Holdings is the only travel fare aggregators that has made it to this list dominated by retail giants. But there is good enough reason to mention them here.

Booking Holdings stocks touched an all-time high of $2,229 per share in the first quarter of 2018.

Here’s Why We Believe Booking Holdings Is worth $2,229 per share,
The X-Factor:

One of the several interesting ah-ha moments we had while preparing together this analysis, and which surprised us the most was the level of consolidation that is undergoing within retail. Major acquisition activities included purchases by private equities and retailers buying Internet companies and other ecommerce players.

Like the recent acquisition of Flipkart by Walmart – Walmart outbid Amazon to buy a controlling stake (77% for $16bn) in the Indian ecommerce giant. The acquisition is touted as the biggest ecommerce deals of recent times. This goes on to show that big-box retailers are eyeing emerging markets like India to strengthen their foothold across the globe and at the same time get an edge over their competitors. The sudden shift in focus from markets like the US, Canada, and the UK is due to the stagnancy that the developed markets are witnessing.

EngineerBabu prides themselves in creating some of the best ecommerce solutions for businesses worldwide. Our dear Australian ecommerce customer Frankgreen has won several accolades such as the Best Design Award for not one, not even two, but three consecutive years!! Another ecommerce application Ondoor (an online supermarket app) created by developers of EngineerBabu have garnered more than 100k downloads in record time.
Contact Us right away for a free consultation!